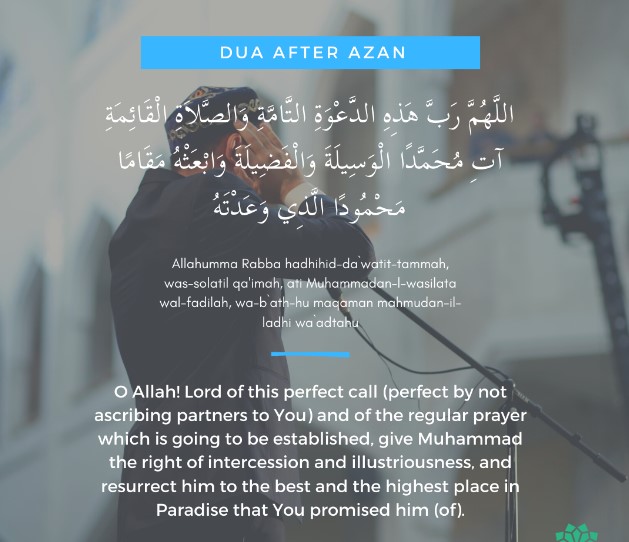 Azan is the Islamic call to prayer. It is recited five times a day to inform Muslims of the five obligatory prayer times. It would not be wrong to say that dua is the feed of the soul which gives man hope and brings him closer to God. Man’s faith in dua strengthens his relationship with Allah. Man can make dua to his Allah at any time, but if this dua is made after the call to prayer, then it has a great reward.

Benefits of Dua after the Azan

Reciting Dua after the Azan has many benefits, as follows:

Jabir bin ‘Abdullah r.a narrated that whoever recites this prayer after which the Azan is heard, Allah’s Messenger s.a.w. said:

Verily, Allah s.w.t. hears every dua. However, there are several factors that may cause our Dua to be rejected such as insincerity, arrogance, or any other unseen shortcomings. This calls us to seek the encouraged time and intentions to pray as taught by the Prophet and his righteous followers. This includes making a Dua after the Azan. “The supplication made between the adhan and the iqamah is not rejected.” (Sunan Abi Daud)

Other Dua to be read upon hearing the Azan:-

By reciting the very same words of the Muazzin, we are answering the Azan (call to prayer). This recitation is meant to be read during the Azan and not after the Azan itself. The Prophet s.a.w. mentioned in a hadith:

“When you hear the Muazzin, repeat what he says.” (Sahih Muslim)

Recite the Salawat upon the Prophet s.a.w.

Our scholars have encouraged us to recite the Salawat after the Azan based on the following hadith:

“When you hear the Muazzin, repeat what he says; then invoke the Salawat upon me, for everyone who invokes a Salawat upon me will receive ten blessings from Allah; then ask Allah to grant al-Wasila (the right to give intercession) for me, which is a rank in Paradise fitting for only one of Allah’s servants, and I hope that I may be the one. For whoever asks that I be given the al-Wasila, he will be assured to be given of my Syafaah (intercession).”

What is meant here is to recite any Dua in general. A person may ask Allah s.w.t. from his deepest hearts for the betterment of both this world and the next, such as asking for wellbeing, protection, and forgiveness for ourselves and our parents. In addition to that, this is also considered to be one of the blessed times for a Dua to be made. Allah’s Messenger s.a.w. said:

“The supplication made between the azan and the iqamah is not rejected.”

Dua  Qunoot is a special supplication that is offered in the last rak’ah of the Witr prayer. In this article, you can find the English transliteration of Qunoot Dua with an image that can be downloadable for ease to memorize.

If you have been wondering if Dua e Qunoot is mentioned in Qur’an, then the answer is NO. It is the Sunnah of the Prophet Muhammad (Sallallahu Alaihi Wasallam). The other confusion is if the Dua for Witr shall be recited before or after the Ruku. According to the Hadith sources, it is permissible to recite the Dua either way (both before or after the Ruku are OK).

It was narrated by Ubayy bin Ka’b that:

The Messenger of Allah (Sallallahu Alaihi Wasallam) used to pray witr with three rak’ahs. In the first he would recite: “Glorify the Name of Your Lord, the Highest” in the second: “Say: O you disbelievers!”, and in the third: “Say: He is Allah, (the) One”. And he would say the Qunoot before bowing, and when he finished he would say: Subhanal-Malikil-Quddus (Glory be to the Sovereign, the Most Holy) three times, elongating the words the last time. Sunan An Nasa’i, Vol. 2, Book 20, Hadith – 1700

How to Outsource Blog Writing

Reasons Why Teaching Arabic As A Foreign Language Is Lagging Behind 

The last witch of Salem returns home to feast in PROSPER,...

The last witch of Salem returns home to feast in PROSPER,...

Reasons Why Teaching Arabic As A Foreign Language Is Lagging Behind